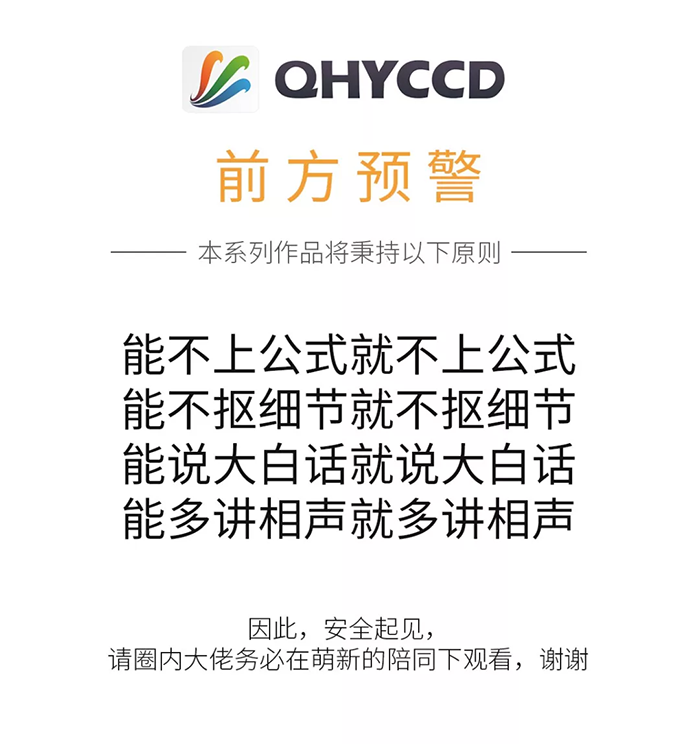 Some of the content and viewpoints of this paper are from:

As we all know, everyday camera photography requires three big pieces: a camera, a lens, and a tripod.Some people don't think a tripod is good enough, but serious photographers (like commercial photographers) will understand the importance of a tripod and will spend a lot of money on it.

And astrophotography, which doesn't require kryptonite lighting like studio photography, is a boon to the wallet.

The machine, as the name suggests, is through the camera modification to change a part of the performance, make it more suitable for the target you want to shoot.The general way to change the machine is to replace, increase or decrease the built-in filter, increase the freezing device, move the sensor position, etc., but the current domestic market of astronomical photography machine is mainly to replace and add the camera built-in filter, is also the soul of the machine.In general, what we call an astronomical filter is a BCF filter (an astronomical filter) instead of the camera's default infrared filter.However, it should be emphasized that the change brought by this change is not only the increase of infrared transmittance, but more of R channel (red light) transmittance.The specific principle is not explained here, but in a word, as a result, the modified camera can capture more red light than a normal digital camera, which is very helpful for deep space photography.

The blue line is a modified filter of a certain brand, and the red line is the infrared cut-off filter of Canon 400D camera.The transmittance of the band exceeding 1000nm is negligible (it is difficult for the camera to recognize), so the majority of the transmittance increased by the machine is in the Red band (about 620-770nm is in the Red band).

There are also some other types of filter modifications.For example, some people like to shoot starfields and use a light filter to suppress skylight.Because of the optical design of the mirror, some people choose to directly remove the camera's default infrared cutoff filter and install the infrared cutoff filter in an additional position between CMOS and the lens, etc.Of course, all of this is for beginners.The biggest advantage is in cost.Because most of the changes are used in the middle Ages of the old DSLR (with the latest flagship to change the machine you do not love??), can be obtained at a low price in the market, the modification of the machine modification cost is more reasonable.Enthusiasts with limited budgets can try it out.But the machine is limited, it has limitations in many aspects.There's no refrigeration for long exposures;Its operation logic is still ordinary digital SLR logic (change machine only change hardware not change software), this logic is not low level, for serious deep space photography is not professional.In addition is because the camera after a machine processing can no longer be used in daily photography, second-hand discount of the interval fluctuation is naturally higher than the original machine.At present, the price of the entry-level astronomical refrigeration camera is relatively easy to accept. Please plan the equipment purchase according to your budget.

Looking around the world, this is also a small minority in the deep space photography circle (especially in China). It should be a popular science. It is good for you to have a brief understanding of this context.Pentax is today "heard of but never used", even for most casual photographers, but Pentax is a name that has been around since the film era for decades.Pentax seems to have a special obsession with shooting stars, with some quirky features built into the camera.

for example, in the current new flagship of the pentax SLR models, in addition to the ancestral strong field is three, pentax machine can automatic identification equipment in latitude and longitude, and even can be based on the special offer for camera sensors generate micro displacement over a period of time to offset the influence of earth rotation, to prevent the star displacement.Sound familiar?Yes, the technology is roughly equivalent to having a theodolite embedded inside the fuselage (which we'll talk about next time).Surprised or not surprised? While it sounds great, there are practical limitations.This design mainly serves for starfield photography, and it still cannot completely replace professional equipment for deep space photography.In addition, foreign deep space photography circle also has a small number of people (faith users) use in the painting of Pentad 645 series, but really no cost-effective, its professional is not up to the level of the price should be.

And then there's us -- professionally designed astronomical cameras.

In terms of sensor types, astronomical cameras can be divided into two types: astronomical CCD and astronomical CMOS.The distinction between the two types of chips is a very important one, which we will detail in a separate article.Let's start with a few other basic questions here.First of all, why refrigeration?In deep space photography, continuous long exposure is the most basic operation.It's perfectly normal for a camera to work for hours on end.And that's where the problem comes in.If the camera works continuously for a long time, it will get hot. For example, some users may stop working or crash when they shoot video with the camera.Black card 6 user, EOS R user has quit the group chat.However, deep space photography is about more than just preventing crashes.You've probably heard of the term "hot noise", which refers to the noise produced by a camera sensor due to heat.Noise can be fatal to deep space photography (imagine a screen full of snowflakes in a night scene with your phone?)., the less noise the better, and the lower the camera temperature, the less noise.QHY series cameras have more than ten years of camera refrigeration technology, most of the cameras can be cooled to below the ambient temperature of 35 degrees Celsius, some CCD cameras can be as low as below the ambient temperature of 40 degrees Celsius.Refrigeration is the basic skill of astronomical camera, refrigeration is not in place on the best chip is white, just like the high school teacher often warned us: "the foundation is not firm, the ground shakes the mountains".Of course, cooling technology isn't just about cooling. It's also about solving a series of problems caused by cooling.For example, if the temperature is too low, the sensor may fog, dew or even frost.Therefore, refrigeration technology should at least include anti-dew-frosting, drying, vacuum and other technologies.So astronomy refrigeration camera in addition to refrigeration and ordinary digital cameras are no different?Of course not.Also very important is the raw data format and control logic.There have been amateur astronomers who bought our cameras, powered them up during the day, and found that the quality of the images on the screen was not as good as the same size home SLRS or even the same size industrial cameras.But the strange thing is that when we get the object in the field, the imaging quality of the latter two objects is completely suspended, and we can't see it at all.In addition to the filter problems similar to those of the astronomy camera, another significant difference between the ordinary and the astronomical camera is that the astronomical camera writes and reads the most primitive data, while the ordinary consumer camera does not.Some people may have objected: don't cameras now come with RAW?Why isn't it primitive?Unfortunately, even RAW output is processed by digital cameras.Almost all cameras perform algorithmic optimization on the output, such as sharpening or noise reduction.This means that even RAW files are photoshopped on the machine.This basic level of optimization is perfectly acceptable or necessary in everyday photography (you might not lose your job if you showed the model's sister real native data), but the same algorithm is fatal to deep space photography.For example, the old in-machine algorithm of SONY Micro single had a relatively strong noise reduction function, which led to the shooting of some stars were directly regarded as noise "harmony" dropped, which is also known as "star swallowing" phenomenon in the circle.Dafa enthusiasts who do not want to betray their faith have at one time resorted to hacking and modifying system code to uphold their faith.I do not know whether today's SONY firmware still exists this phenomenon, the author has not been verified.In a word, the development of astronomical camera is basically carried out at the bottom of the sensor, and the data obtained is also from the bottom. Therefore, the parameters we can see in the astronomical operation software are relatively primitive, and the daily camera operation interface is invisible.This is also one of the important differences between the astronomical camera mentioned above and the modified machine.In addition, there are black and white astronomical camera and color, and the current consumer SLR without the market has been difficult to see black and white cameras.As for the pros and cons of black and white and color, we will continue to analyze the chip principle.

This is another category of astronomical camera.Planetary photography (solar system photography) and deep space photography do not have the same equipment requirements because of their different shooting methods and post-processing methods, which we will mention here for a moment.While the usual process of deep space photography involves continuous camera work -- taking multiple sets of pictures with long exposures -- stacking and postfilming, the requirements for planetary photography are simpler and more straightforward, with a four-word rule: only fast.Relatively speaking, the requirements for frame rate of planetary photography equipment are higher than a series of other important indexes such as picture frame.This is partly due to the fact that planetary images have to be taken against the effects of apparent tranquility (atmospheric disturbance for the moment), and partly due to the difference in image caused by the rotation of some objects.In short, taking pictures of planets requires a lot of images that can be superimposed in a short period of time, and even high-speed photography cannot meet the requirements. Therefore, one processing method is to shoot the video directly in the early stage, and then draw frames and overlay.I once asked the master how to take a good picture of the moon, the master smiled: first fold it ten thousand.Therefore, planetary cameras generally use small sensors to reduce the amount of data in a single frame to improve the frame rate.The QHY5III series, for example, can easily soar to 100 frames per second on USB3.0.It's not all fun and games, but it takes two to three minutes to shoot tens of thousands of frames (equivalent to tens of thousands of footage) at a frame rate of 5III series.Due to its outstanding performance, many domestic observatories/planetariums have used QHY5III series cameras to do real-time broadcast of planets and carry out popular astronomy science work.

Planetary photography is generally short duration, so there is usually no need for cooling.Without the cooling hardware and the small sensors, planetary cameras cost much less than refrigeration astronomy cameras.Of course, there's nothing wrong with using a refrigerated camera for planetary imagery, as long as it meets certain frame rates.

A partial view of the lunar surface (by Luc Mazan) taken with the Refrigerated Astronomy camera QHY183.Because the QHY183 is an entry-level model, a small one-inch frame can provide good picture quality and sufficient frame rate for both deep space and planetary photography.