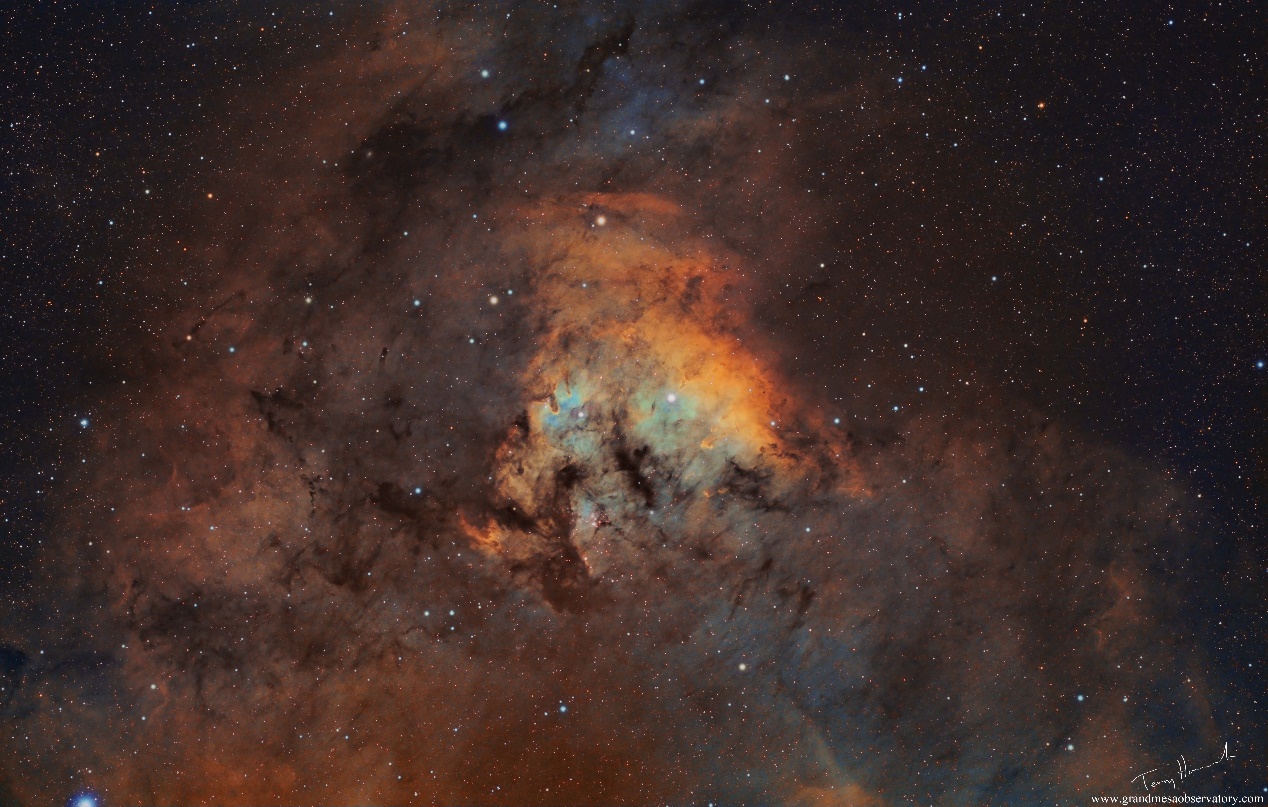 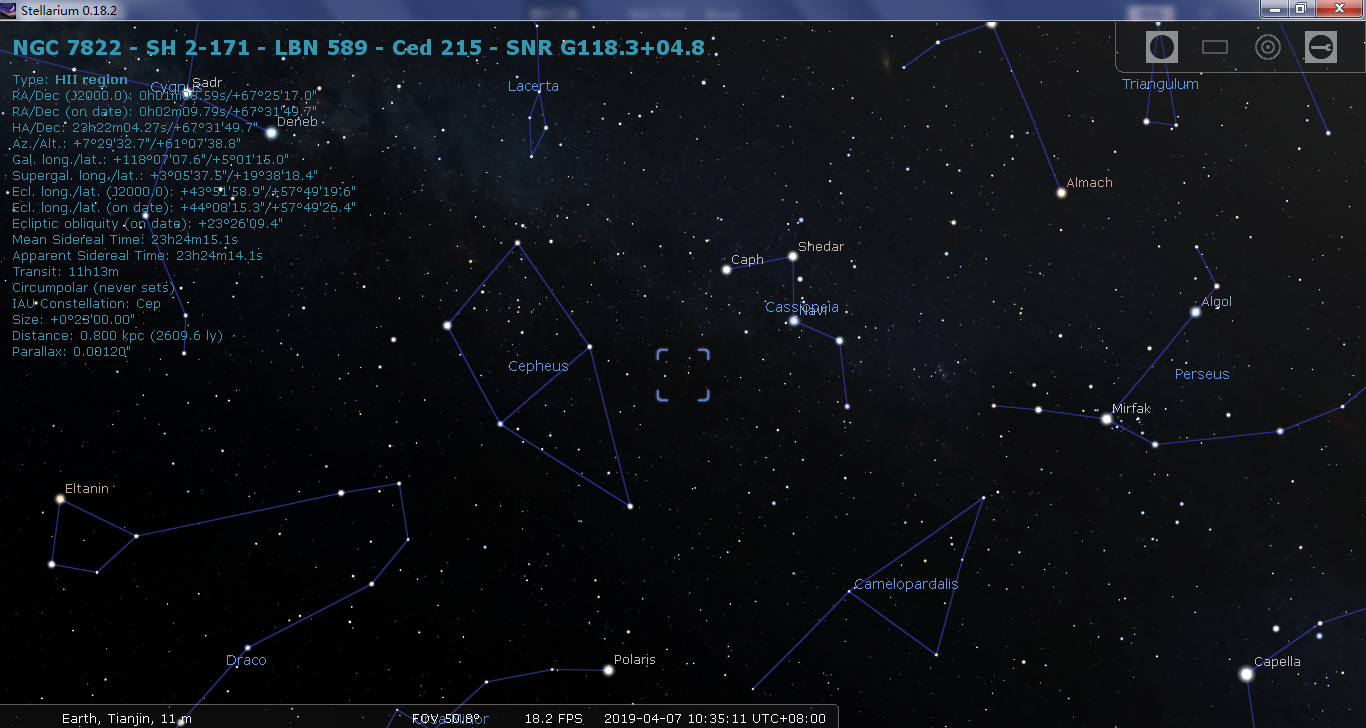 You can find the NGC7822 here, between the constellations Cepheus and Cassiopeia. Courtesy of Stellarium.
Encompassing the emission region designated Sharpless 171 is the star forming complex NGC 7822 lying at a distance of roughly 3200 light years away in the constellation Cepheus. This is a spectacular example of a stellar nursery. The emission nebula shines as a result of the ionizing radiation from one of the hottest stars known - BD+66 1673 - which has a luminosity 100,000 times that of our sun. Curiously enough, BD+66 1673 is also an eclipsing binary, which means that it is actually two stars orbiting each other and are aligned in such a way that one star occasionally eclipses the other from our perspective. In addition, this is a very young star forming region with no more than a few million years old. It will continue giving births to new stars for several million more years until the radiation from the new stars blows away the last remnants of hydrogen gas, leaving behind a small cluster of young bright stars.
You have probably seen the pillars of creation captured by the Hubble Space Telescope (the image below). 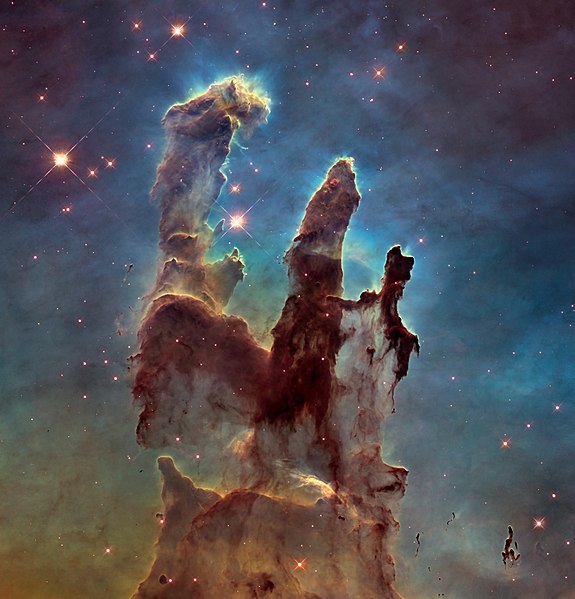 Pillars of creation, courtesy of NASA.
The NGC7822 also contains structures similar to the pillars of creation that are called “elephant trunks” (more formally known as “cold molecular pillars”). They can be clearly identified in this cropped image. The details would probably have been even finer if a telescope with a longer focal length had been used. 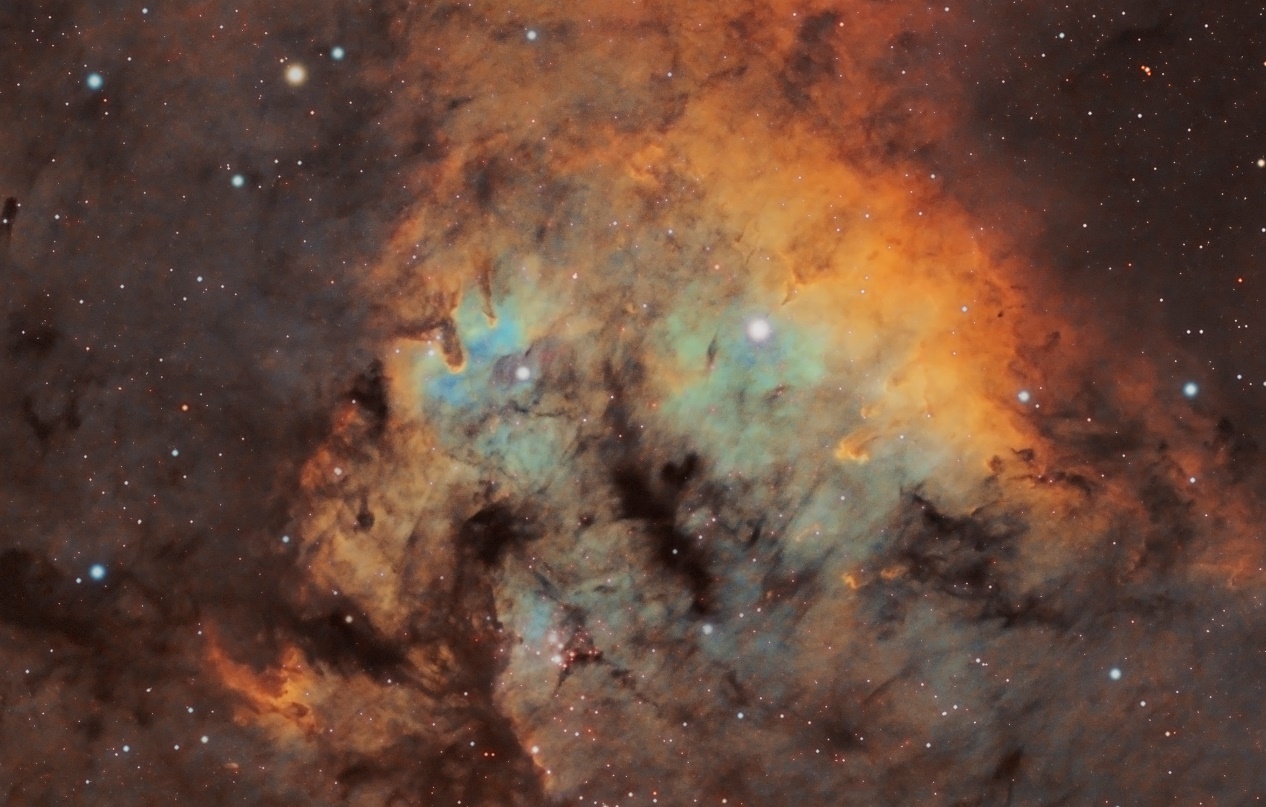 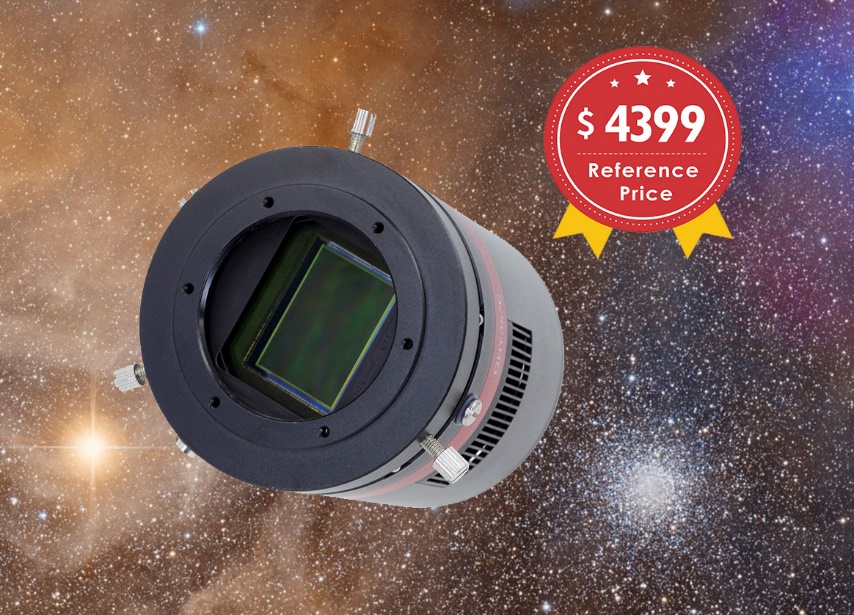 The camera used by Terry Hancock, QHY367C, is the top performing full frame camera in COLDMOS Series. Its sensor, Sony Exmor IMX094 CMOS sensor is also used in the Nikon D800/810 DSLR cameras. Having this excellent sensor on QHY367C, the camera has 36 Megapixels, 2.4e- readout noise, 56ke- full-well capacity, 14-bit A/D and a dynamic range of more than 14 stops. With dual stage TE cooling and QHYCCD’s proprietary technology, the dark current of this camera has been lowered to a remarkable 0.0015e-/p/s at -15C.
When it comes to data output, although many cameras claim to output RAW image files, there is often still some internal processing performed on the image leading to adverse consequences such as the "star eater" effect. The QHY367C outputs TRUE RAW data, preserving the original data for maximum compatibility with astronomical image processing programs and other scientific imaging applications.
When performing deep-sky astrophotography, halos around bright stars is often quite a tricky problem to overcome. However, this can now be greatly mitigated by QHY367C’s high quality AR coatings of the optical window and sensor surface. IR blocking is not present, so this model can be used with maximum sensitivity to H-alpha and near IR when desired; otherwise, a simple IR blocking filter (L filter) can be attached for typical RGB imaging with IR cut.
Just as usual, QHY367C has zero amplifier glow, anti-dew technology, 128MB DDR buffer and multiple mechanical adapters for users to use it on different optical systems.
For more astronomical and product news, please visit our official site and subscribe to our social media.
https://www.qhyccd.com/index.php?m=content&c=index&a=show&catid=94&id=10
You can also visit the astrophotographer Terry Hancock’s Facebook page (https://www.facebook.com/terry.hancock.715) to have another look at his other stunning pictures captured using QHYCCD cameras.
Next