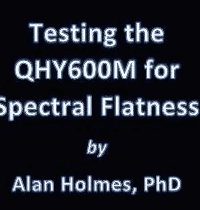 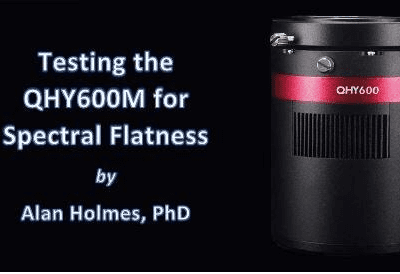 I have had an idea for many years to build and sell a spectrally agile flat field illuminator device. I thought about this since at SBIG we routinely encountered CCDs that had flat field variations that changed with wavelength by significant amounts. We saw as much as 10% variation between red and blue flat fields for STL-11Ks. We had to eat some chips. I finally had time to build and try out such a device while under lockdown using a new QHY600M camera. Like the STL-11K, the QHY600M has a 35mm format monochrome sensor, although the Sony sensor in the QHY camera is CMOS vs a Kodak CCD in the STL-11k. Unfortunately, at least with the QHY600M, it looks like this is a solution in search of a problem. This short article describes what I found. 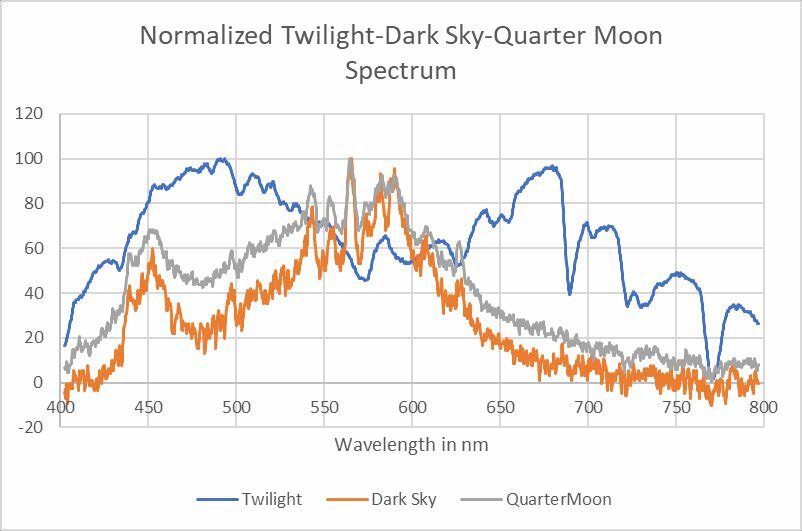 Figure One: Normalized Spectra for the Sky Background on Clear Nights (for me in Santa Barbara) 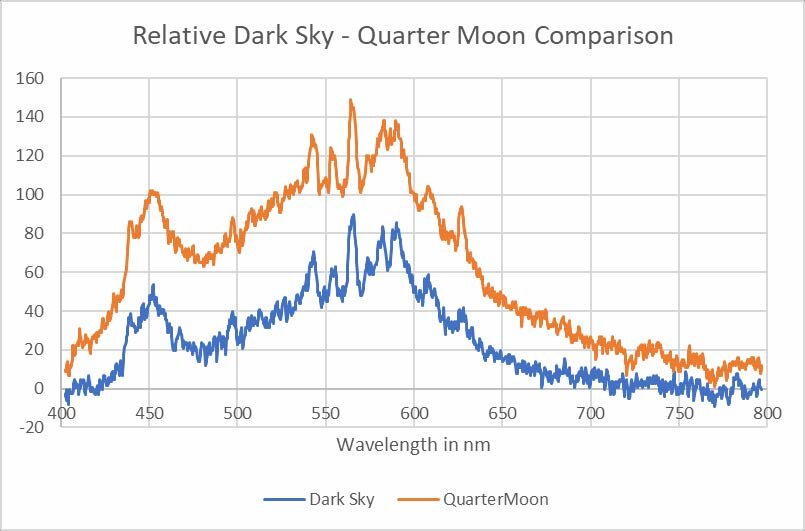 The sky background, for most users, is a mix of nightglow and artificial light, and the moon also changes the distribution of energy with wavelength. I built a low-cost diffraction grating based spectrometer using an inexpensive QHY5L-II-M camera to measure this background and found the following results. Figure One shows the normalized (to the peak) spectrum of the night sky for a late twilight condition, dark sky, and quarter moon dark sky from my back yard. My light pollution is not too bad – I can usually see 5th magnitude stars on a night such as these. The vertical axis is normalized counts and not corrected for quantum efficiency, but it is a detector used for astronomy, so it is representative. 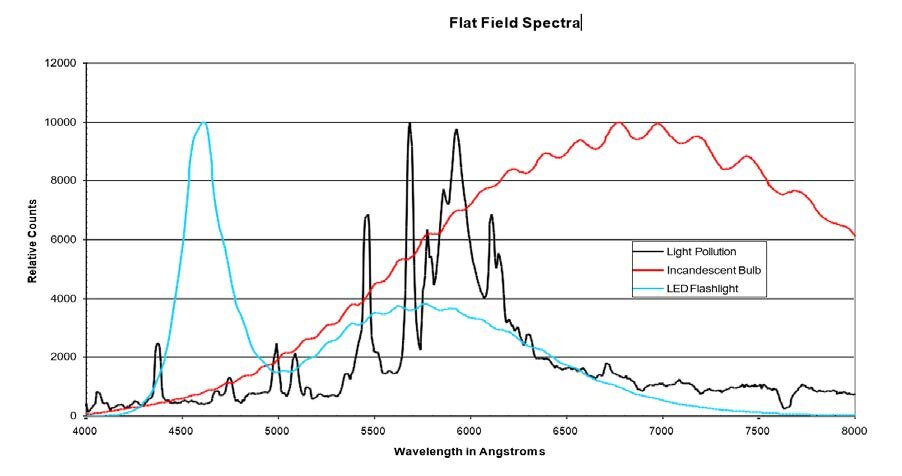 For reference, Figure Two shows the difference between a good night, and a good night with a quarter moon in the sky, in absolute counts. As you can see, the presence of a quarter moon increases the overall brightness by about a factor of two, and more so for near infrared wavelengths.

As you can see, the gold standard for astrophotography, a twilight flat, is not very representative of a dark night, having WAY too much near infrared light. What is also interesting is that my dark sky spectrum has changed considerably from 11 years ago. Figure Three shows a sky background measurement from my backyard in 2010 (the black Light Pollution line). Note that there is now much more blue energy, with a peak around 450 nm. This is due to fluorescent lights being replaced by white LED lighting. 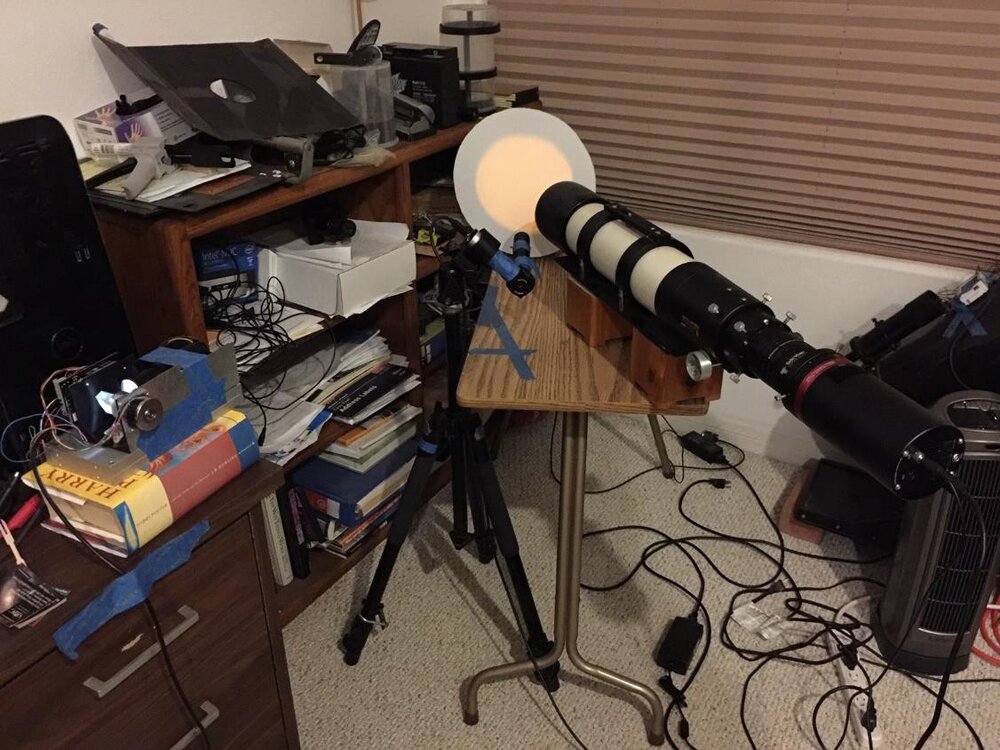 Prior to the availability of white light LEDs astronomers typically used incandescent bulbs for flat fields, turned down low so they wouldn’t be too bright, which resulted in very orange illumination. My idea was to build a flat field system that had two parts – a spectrometer to measure the sky background, and an agile monochromator to play back a spectrum that would match the sky background, verified using the very same spectrometer. This way no absolute calibration was needed.

What I constructed using an Arduino microprocessor is a stepper motor driven monochromator that could play back a full spectrum from 400 to 800 nm every two seconds, with the light source being a white light LED modulated using pulse width modulation (PWM) in synchronization with the stepper motor wavelength selection. As long as the user’s sensor was taking flats with exposures of multiples of two seconds the sky background could be accurately replicated. 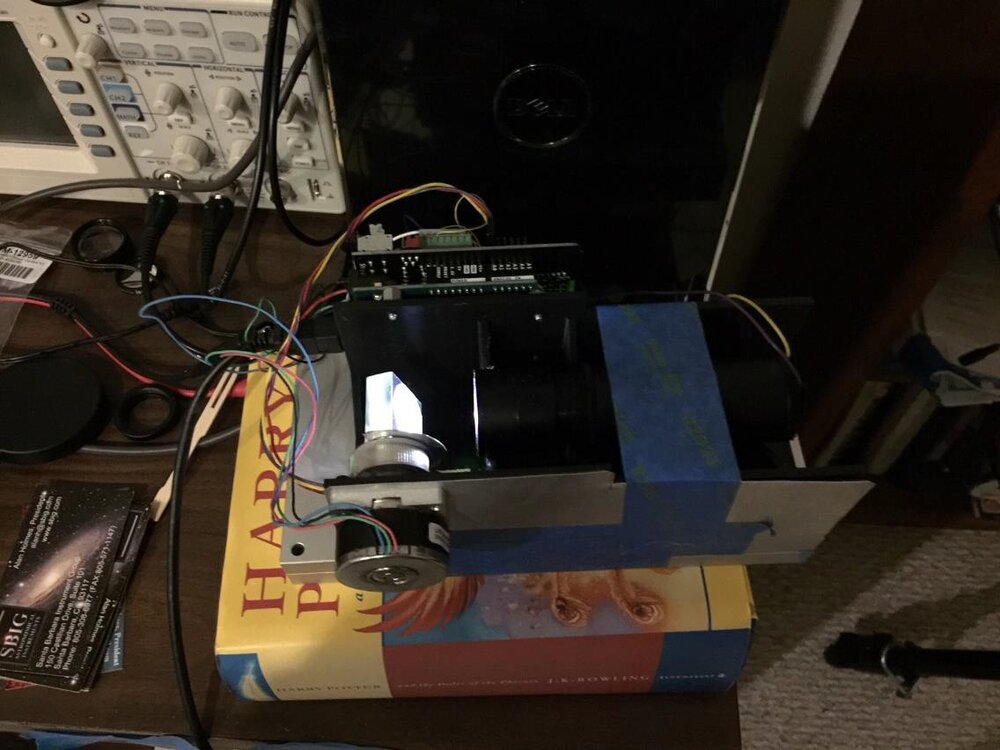 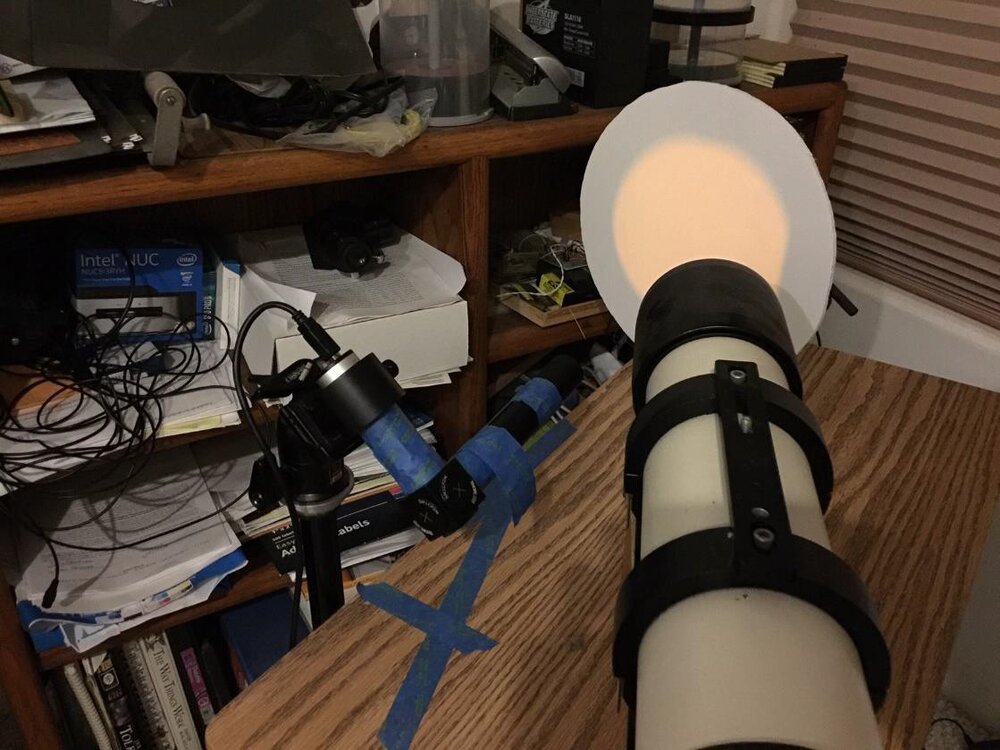 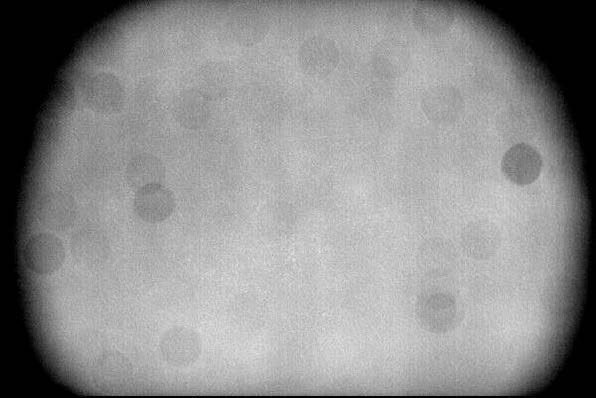 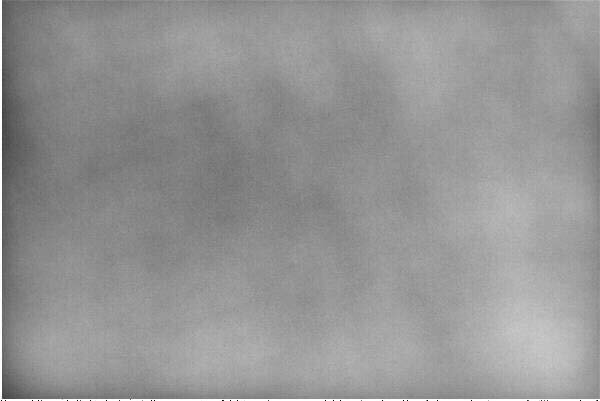 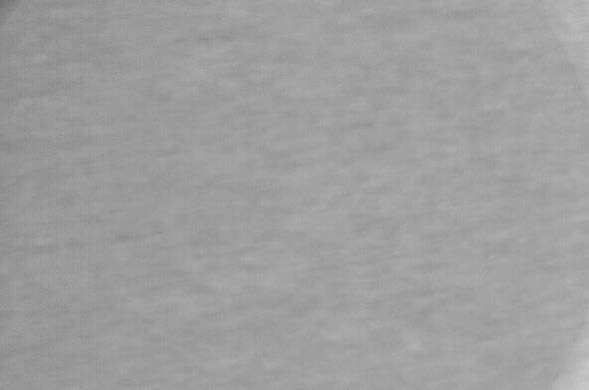 In order for my idea to be commercially successful I had to be sure I was solving a problem that astrophotographers suffered from. I had no experience with the Sony CMOS sensors that have taken over the market in recent years and did not know how spectrally uniform they were. So, I had to build a flat field setup to test modern sensors.

Figure Four shows my final flat field setup. A TeleVue NP101 carrying a QHY600M CMOS camera was used to view a white panel illuminated by my monochromator illuminator (Figure Five), and spectrally monitored with my spectrometer (Figure Six). The white panel was mounted on a motorized rotary stage so I could spin it, since I found that at very low levels white posterboard introduced spectral noise into flats, and I wanted to take perfect flats.

Figure Seven shows a flat field at 643 nm for the QHY600. Note the usual vignetting and dust donuts. Figure Eight shows a 643nm flat field flatted with a 448 nm flat field – spectral differences would be obvious if they were there. The contrast scale is 5% black to white. For Figure Eight the posterboard was spinning. Figure Nine shows what you get if it is not. The residual structure for eight and nine is about 0.5% peak to valley.

The bottom line is the spectral variation in the QHY600M’s CMOS sensor is only 0.5%! Sony should get a prize. For reference, amateur astronomers achieve noise levels of 0.1% in very deep exposures but the spectral variation is a second order effect, and is probably not limiting them with Sony chips. I suspect the so-called scientific back-illuminated CCD sensors are not nearly this good. I know the Kodak parts were not. However, I don’t see a way to make a product out of this at this point, given these results. So, for now it will be tabled until an application emerges that makes me rethink this.

Alan Holmes received his PhD in Optical Sciences at the University of Arizona and has participated on 6 different space instruments including his role as Senior Scientist for the Hubble Space Telescope spectrometer. In 1989, Alan co-founded and was President of SBIG, an astronomical imaging company specializing in CCD cameras and instrumentation for the amateur and professional astronomy until his retirement in 2014. He currently works as a consultant developing satellites for remote earth imaging.