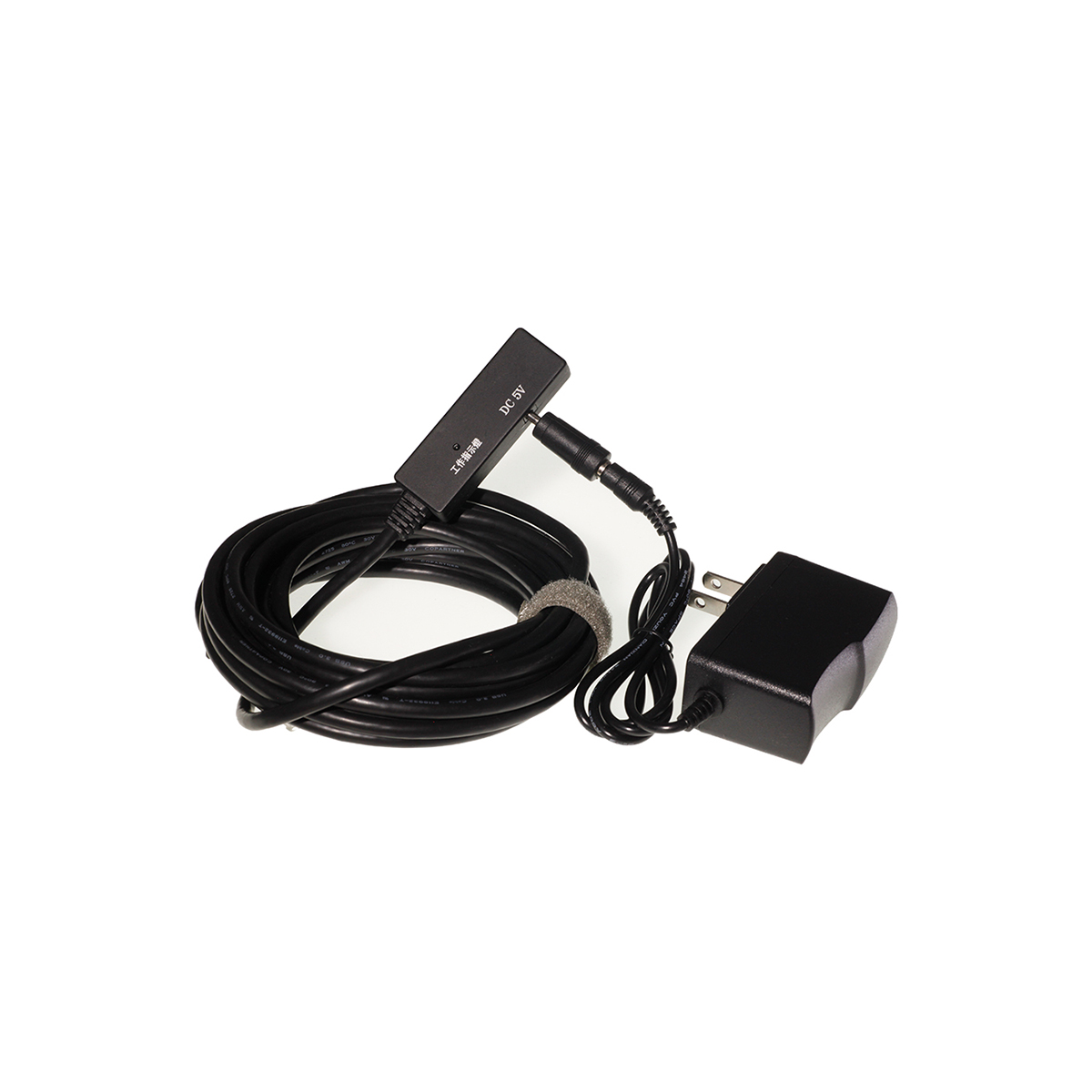 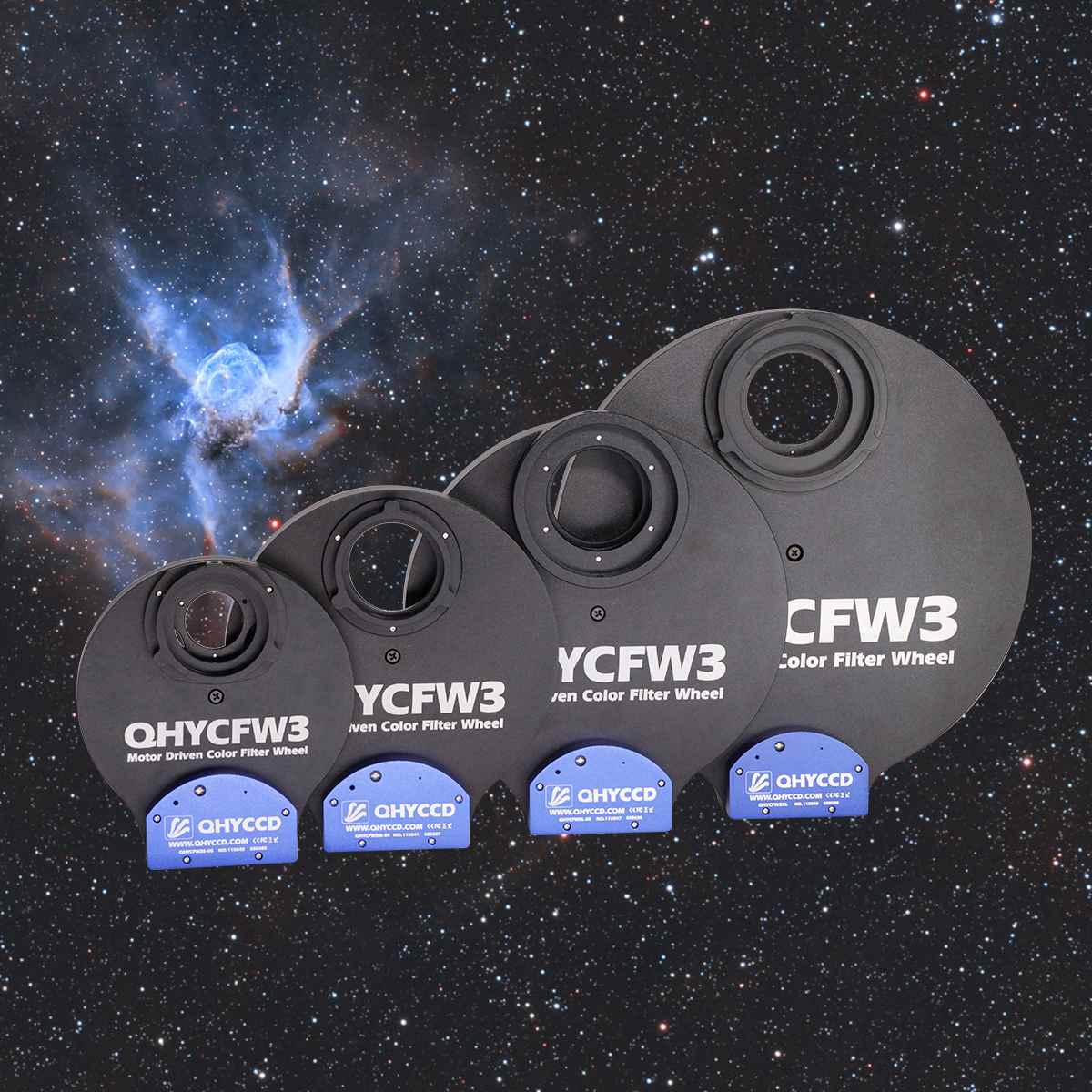 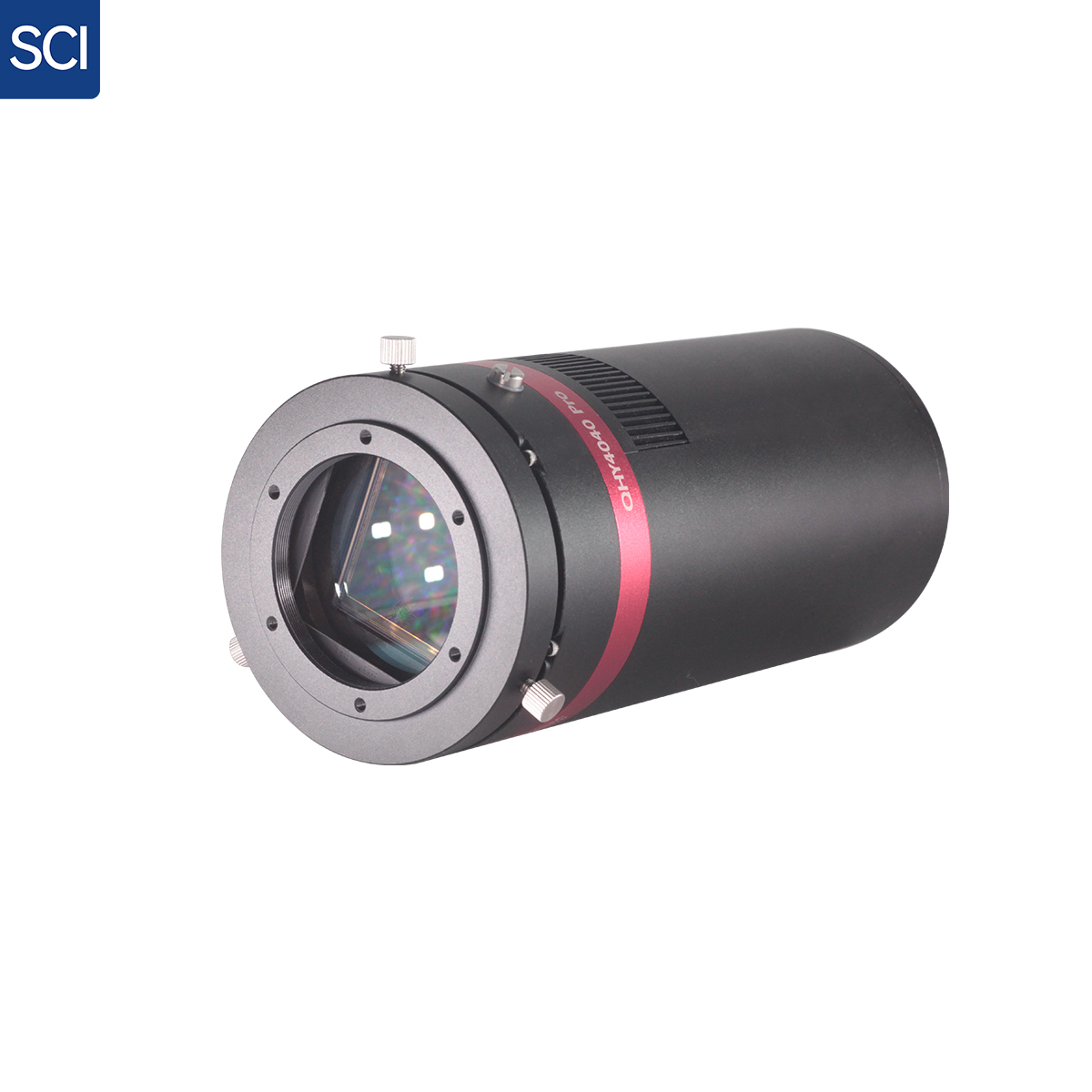 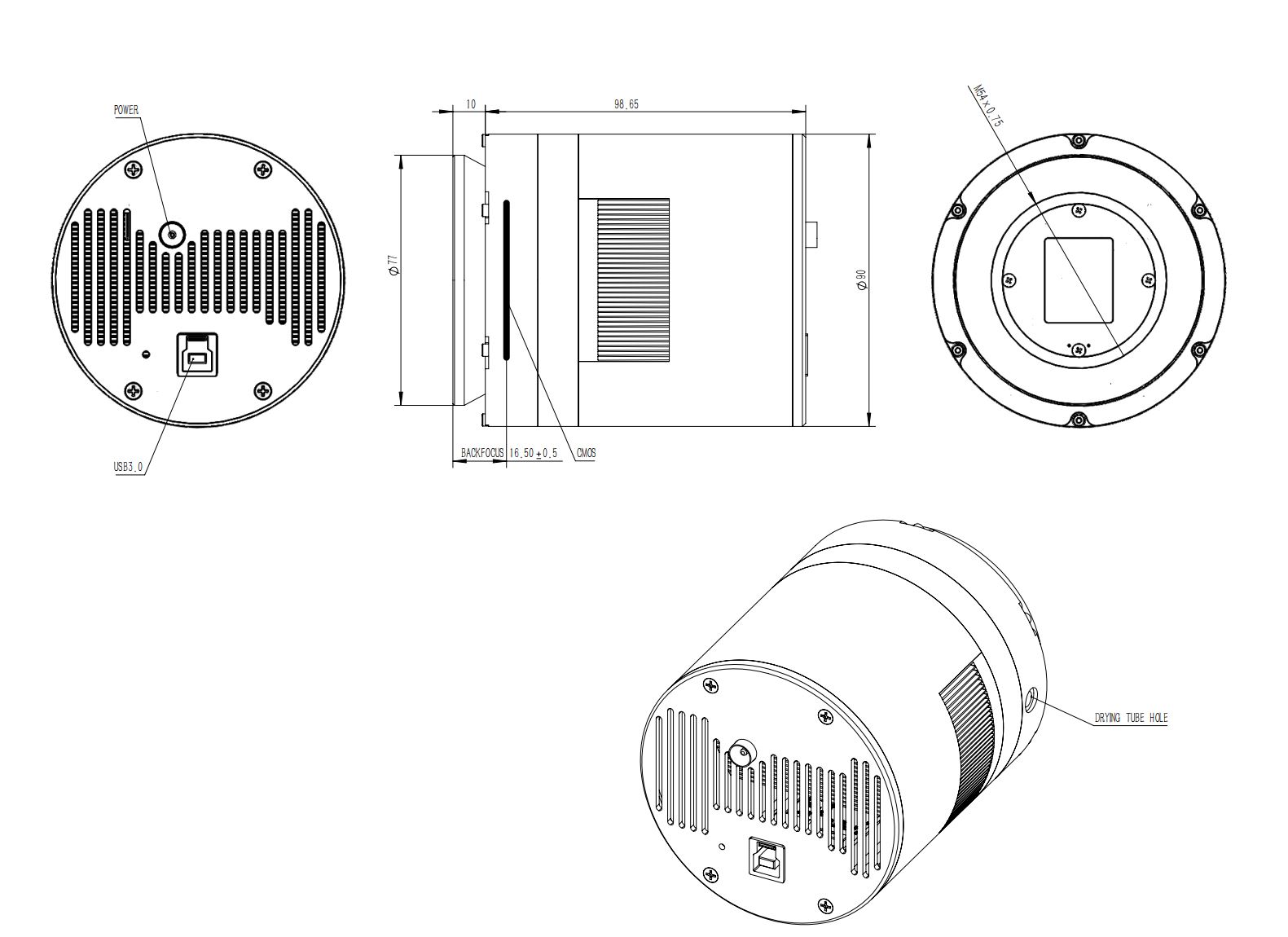 All-In-One Pack （Driver, SDK and Software) for WINDOWS supports all QHYCCD USB3.0 devices only except PoleMaster and some discontinued CCD cameras. Please go to https://www.qhyccd.com/download/ and install it.

The camera requires an input voltage between 11V and 13.8V. If the input voltage is too low the camera will stop functioning or it may reboot when the TEC power percent is high, causing a drain on the power. Therefore, please make sure the input voltage arrived to the camera is adequate. 12V is the best but please note that a 12V cable that is very long or a cable with small conductor wire may exhibit enough resistance to cause a voltage drop between the power supply and the camera. The formular is: V(drop) = I * R (cable). It is advised that a very long 12V power cable not be used. It is better to place the 12V AC adapter closer to the camera.

First connect the 12V power supply, then connect the camera to your computer via the USB3.0 cable. Make sure the camera is plugged in before connecting the camera to the computer, otherwise the camera will not be recognized. When you connect the camera for the first time, the system discovers the new device and looks for drivers for it.  You can skip the online search step by clicking “Skip obtaining the driver software from Windows Update” and the computer will automatically find the driver locally and install it. If we take the 5IIISeries driver as an example (shown below), after the driver software is successfully installed, you will see QHY5IIISeries_IO in the device manager.

Please note that the input voltage cannot be lower than 11.5v, otherwise the device will be unable to work normally.

Before using software, make sure you have connected the cooling camera to the 12V power supply and connected it to the computer with a USB3.0 data cable. If it’s a planetary/guiding camera, 12V power is not needed.

Run EZCAP_QT. Click “Connect” in Menu -> Camera. If the camera is successfully connected, the title line of EZCAP_QT will display the camera firmware version and the camera ID as shown below. 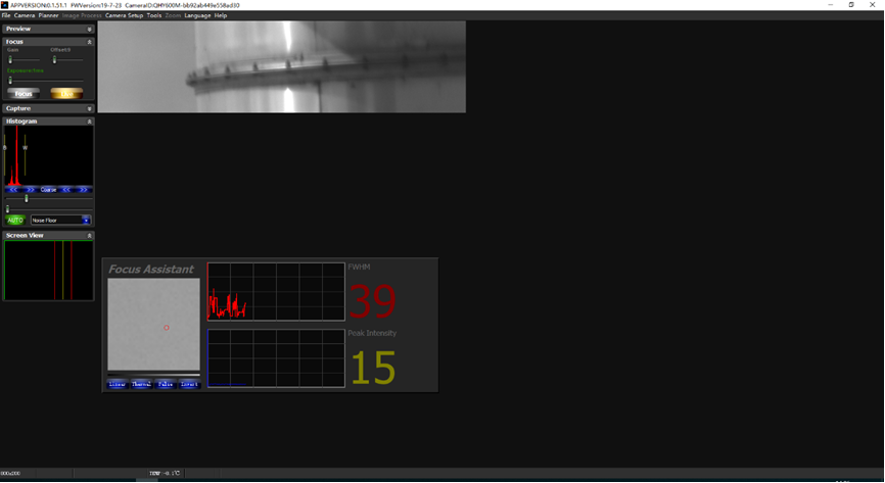 You can use the “preview tab” to preview and use the focus tool to focus. Then use the “capture tab” to capture the image. 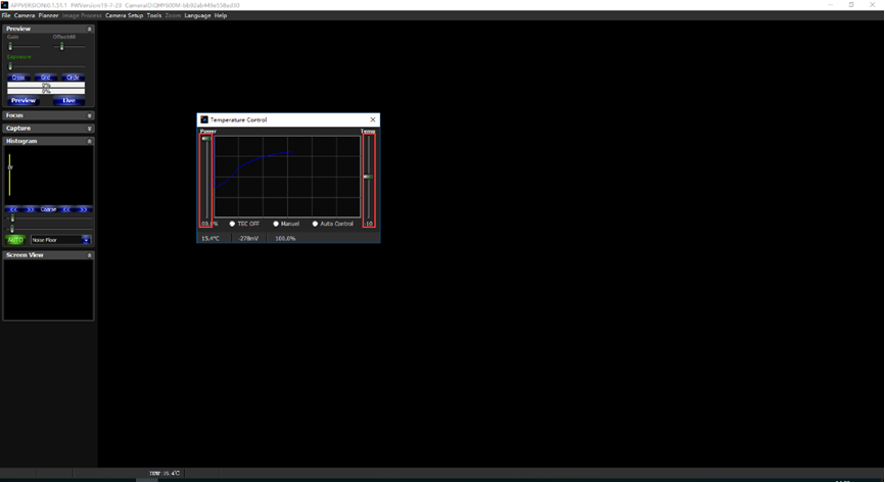 Launch SharpCap. If the software and drivers mentioned above are installed successfully, the video image will appear automatically about 3 seconds after the software loads. You will also see the frame rate in the lower left corner of the software window as shown below. 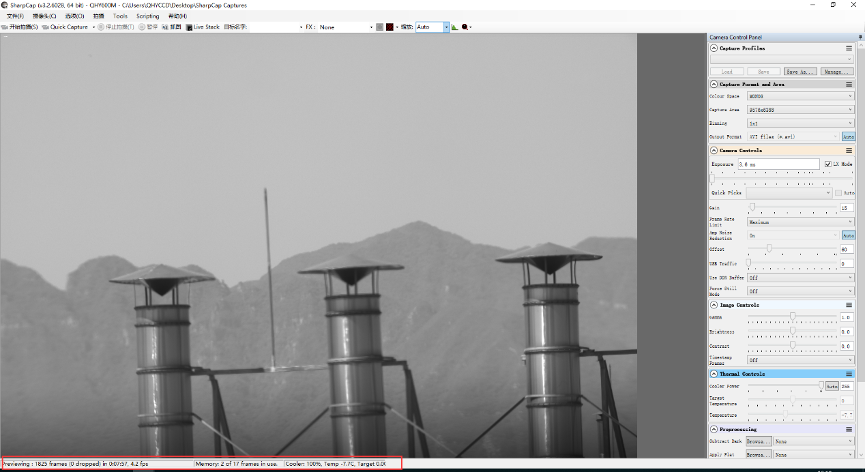 If you have already started the SharpCap software before connecting the camera, in order to open the camera, click on the “camera” in the menu bar and then select the device.

Offset adjustment. When you completely block the camera (i.e., like taking a dark frame) you may find that the image is not really zero. Sometimes this will reduce the quality of the image contrast. You can get a better dark field by adjusting the offset. You can confirm this by opening the histogram as indicated in the figure below. By selecting the “LX” mode you can expand the exposure setting range and take long exposures.

With ASCOM drivers, you can use the device with many software packages that support the ASCOM standard. We will use Maxim DL below as an example, but a similar procedure is used for The SkyX and other software packages supporting ASCOM.

First make sure you have not only loaded the ASCOM drivers but that you have also downloaded and installed the ASCOM platform from ASCOM. After both the drivers and platform are installed, start MAXIMDL. Follow the instructions shown below to finish the setup. Then Click Connect in and enter the software. 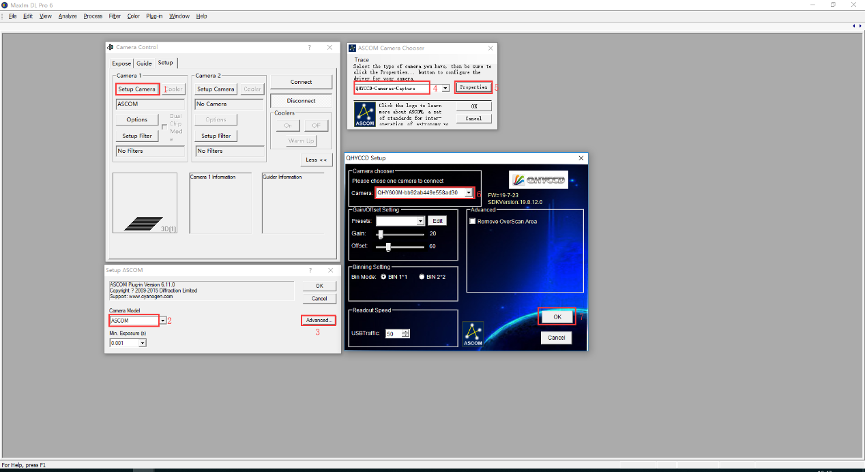 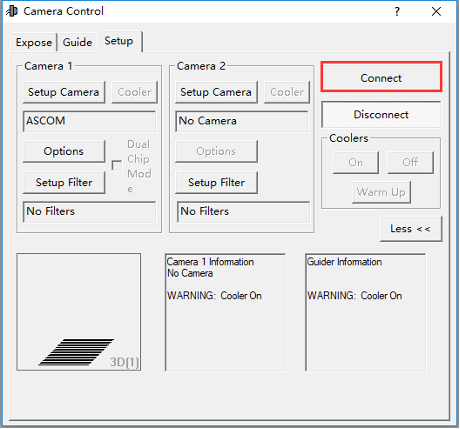 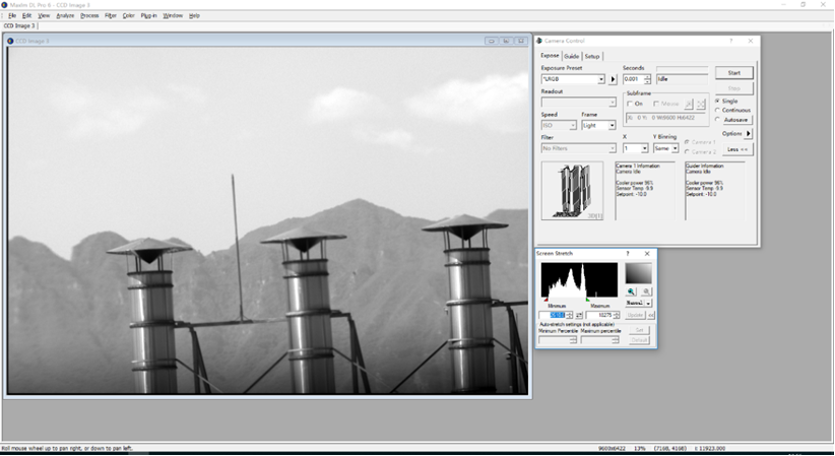 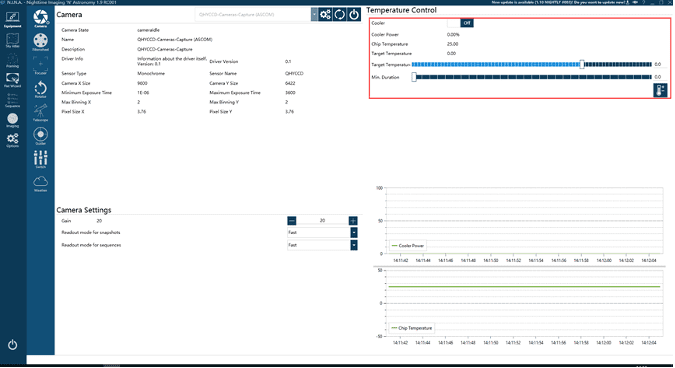 Turn on the TE cooler to set temperature. Then set the exposure time to capture the image. QHYCCD BroadCast WDM Camera is a broadcast driver that supports QHYCCD cameras with video broadcast function, which can meet the needs of customers to send video images to other target software. For example, use sharpcap to connect a WDM-enabled camera, and the sharpcap display video image can be sent to other WDM-supported software for display, which is suitable for video online broadcast applications. The installation process is over, right-click the computer to find the device manager, and check that the image device name is QHYCCD BroadCast WDM Camera, which means the installation is successful. Activate the function:
Usually sharpcap is used to connect the camera as the broadcasting terminal. After connecting the camera, you need to turn on the Enable Live Broadcast switch to broadcast. Precautions:
Currently only supports Windows system.
Currently, the SDK does not support 16 bits for the time being.
RGB24 mode must be selected for color images, otherwise the image will appear gridded.
Dark Frames
QHYCCD BURST Mode
QHYCCD BURST Mode

This mode is a sub-mode of continuous mode. This function can only be used in continuous mode. When this function is enabled, the camera will stop outputting image data, and the software frame rate will be reduced to 0. At this time, send relevant commands to the camera, and the camera will Output the image data with the specified frame number according to the settings, for example, set Start End to 1 6, the camera will output the image data with the frame number 2 3 4 5 when receiving the command.
Note:
1. When using Burst mode in fiber mode, the first Burst shot will be one less. For example, if the start end is set to 1 6, the output of 2 3 4 5 is normal, but in fact, only 3 4 will be output during the first burst shot. 5, 2 will not be received, the second and subsequent shots can normally obtain Burst images 2 3 4 5. This problem will be fixed later.
2. QHY2020, QHY4040 found that the frame number that came out when the exposure time was short is [start+1,end-1] but the one that came out under long exposure was [start+2,end]
3. When the camera is just connected, if the set end value is relatively large, the camera will directly output the picture after entering the burst mode. Therefore, it is necessary to set the camera to enter the IDLE state and then set the start end and related burst operations.

The following is the usage of Burst mode related functions: 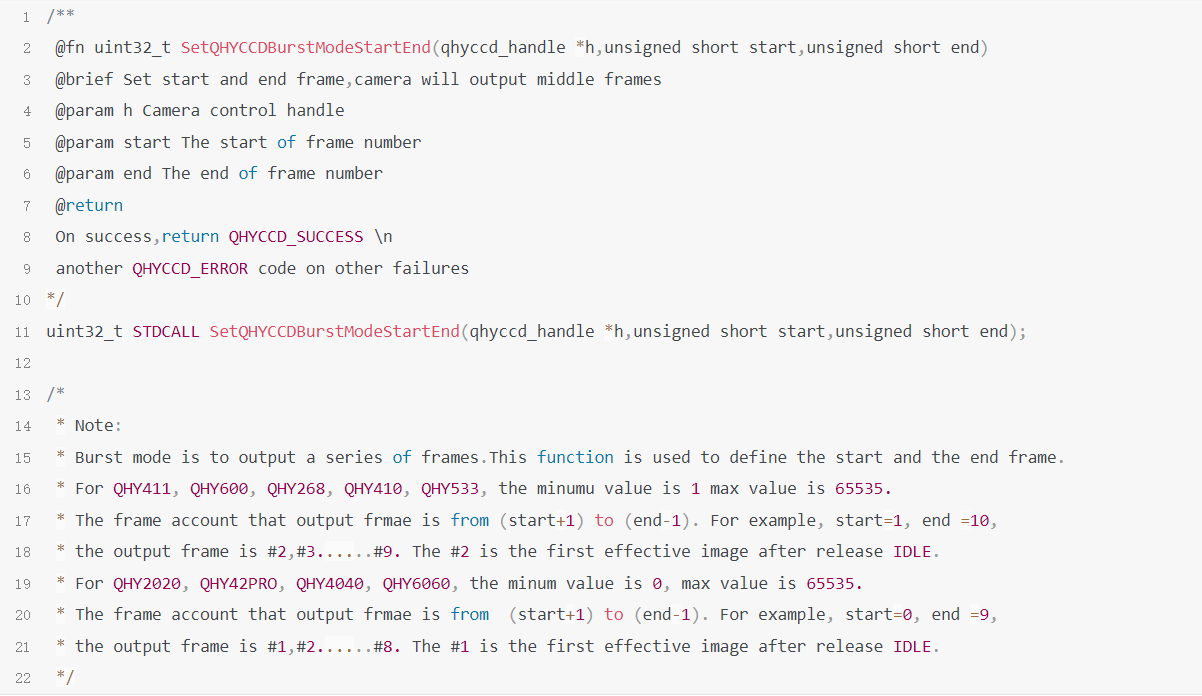