After the launch of the QHY600 refrigerated CMOS with native 16-bit AD conversion, it has received wide attention from astrophotography lovers, and the first batch of production products were ordered out of stock in no time.
QHY600 uses SONY's IMX455 full-frame back-illuminated chip, which provides a variety of readout modes. Therefore, in addition to astrophotography, QHY600 also provides some relatively professional functions to make full use of QHY600's back-illuminated high sensitivity. , 16-bit native AD sampling, higher frame rate characteristics at ultra-high resolution. In QHY600 Professional Edition, these professional functions will be further enhanced. Including 20Gbps fiber interface with ultra-high-speed transmission rate.
Recently, we have received many user inquiries about the linearity of the QHY600 to determine whether the data of the QHY600 can be used for astrometric metering. In this regard, we conducted a preliminary linearity determination experiment.
The experiment is to obtain the average value of a fixed area by shooting the flat field plate with different exposure times. After converting the average value to a value in terms of charge, draw a curve that the charge read by the image sensor increases as the exposure time increases
In order to obtain the maximum full well range data. We used a minimum gain of 2 in the QHY600 read mode (GAIN = 0). The obtained curve is as follows. Can be seen from the figure. QHY600 has very good linearity over a wide range. When the full well is greater than 73000e, the linearity starts to decrease, and the curve conforms to the law that the linearity of general image sensors starts to decrease in the near saturation region.

The linear fitting of the passed curve can make a more detailed assessment of the linearity situation. In order to avoid the influence of the non-linear region on the fitting result, we intercepted the part smaller than 73000e and fitted it. 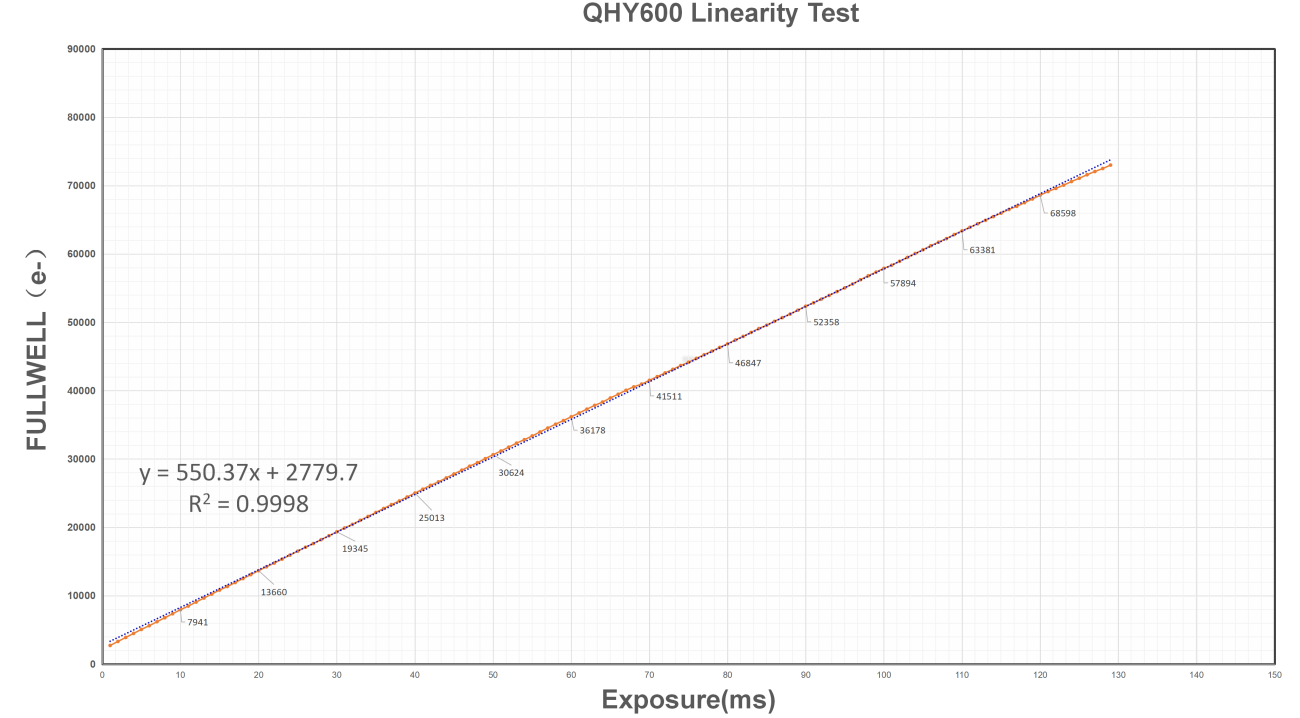 The R ^ 2 value can reach 0.9998. As can be seen in the figure above, there is a small deviation between the test curve and the fitted curve when the exposure time is short. We will study this further to determine if this data is affected by other factors.
Next