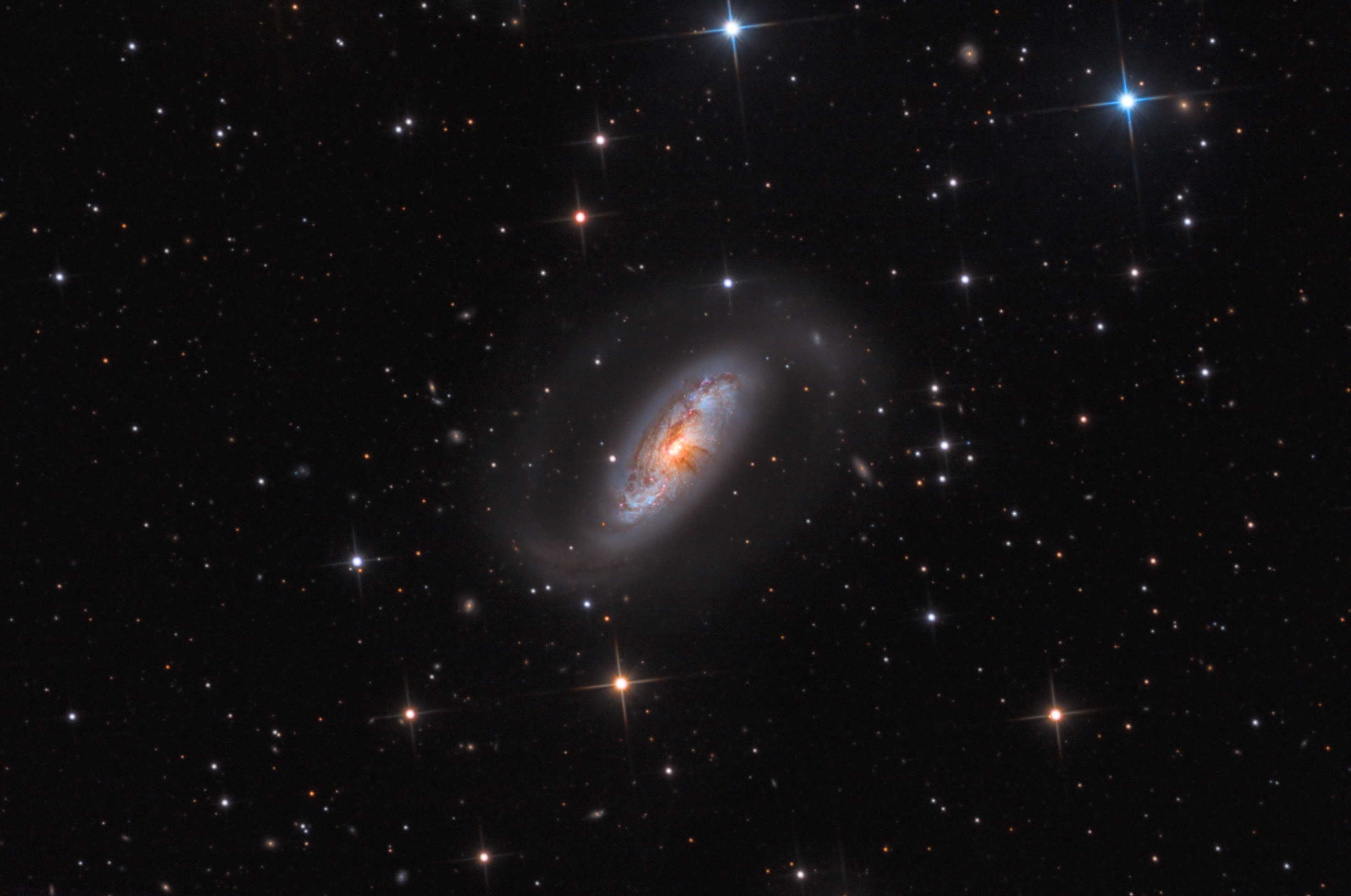 NGC1808 taken by Lee Borsboom from Australia with QHY178M. 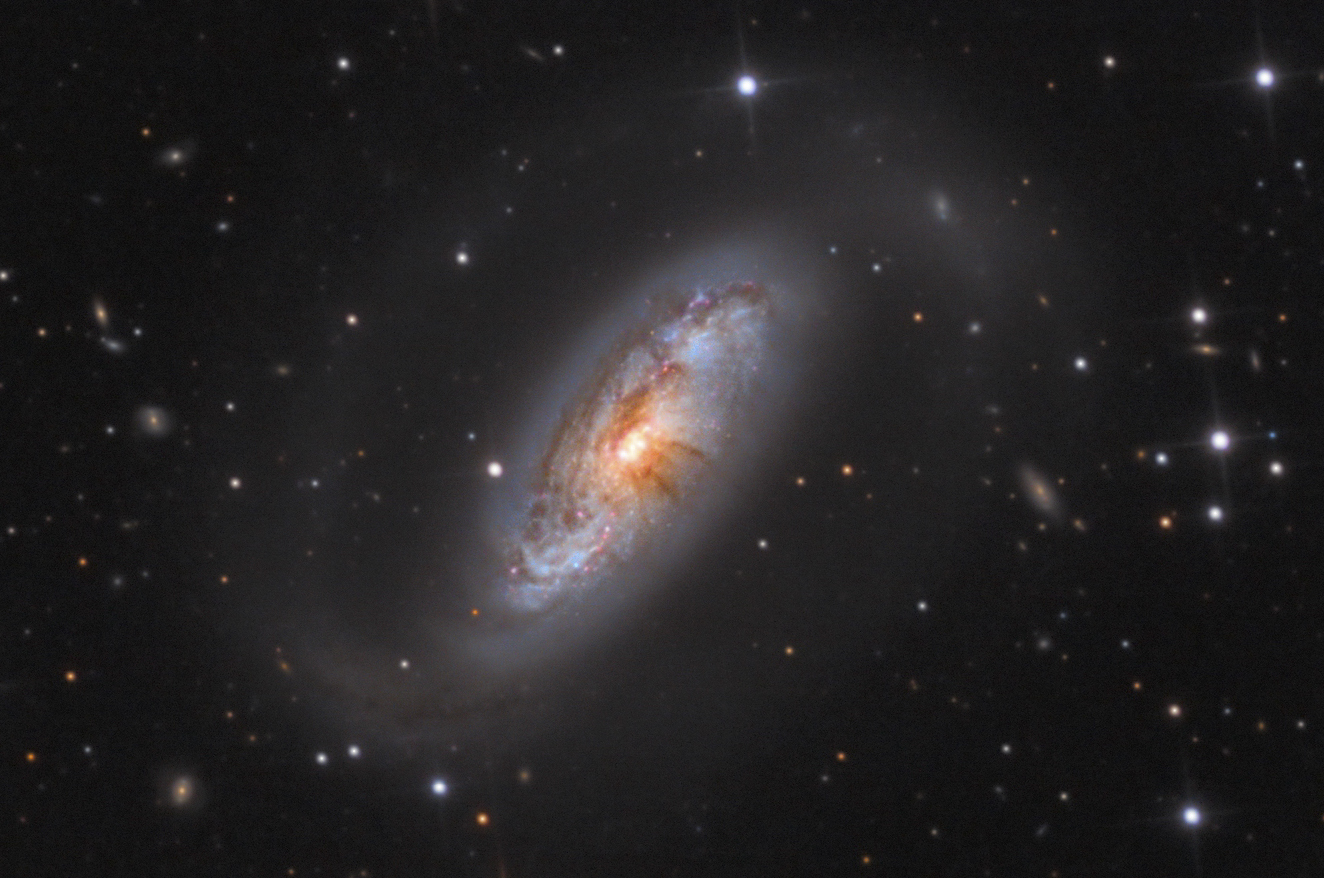 Croped image.
Technical information:
Imaging camera: QHY178M
Telescope: TS 8"F4.5 ONTC Newtonian
Mount: Astro-Physics Mach-1 GTO CP
Filter: Astrodon E-series 2 LRGB
Accessory: TeleVue Paracorr Type 1
Software: PixInsight
Frames: L: 38x300", R: 17x300", G: 15x300", B: 14x300"
Integration: 7 hours
NGC1808 is a Seyfert galaxy located in Columba. Seyfert galaxies are one of the most studied types of galaxies in the world. Their galactic nuclei have very high surface brighhtness and their spectra contain high-ionisation emission lines. Seyfert galaxies are thought to have the same physical mechanism as quasars, with a supermassive black holes at the centre surrounded by accretion disks and substances falling inward. Although these galaxies are not quite different from the common spiral galaxies in visible light, their nuclei are so bright that the luminosities are comparable to the luminosities of whole galaxies the size of the Milky Way when studied under other wavelengths. 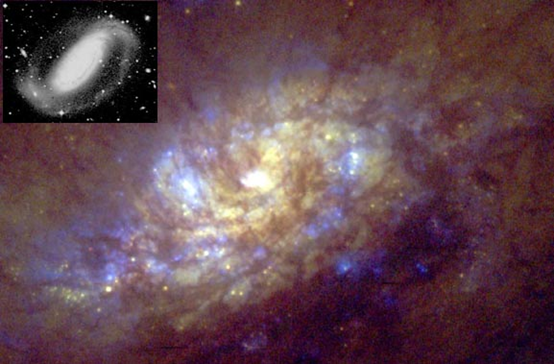 Courtesy: J. Flood (AAI), M. Mutchler (STScI), WFPC2, HST, NASA
This image of the core of NGC1808 taken by the WFPC2 camera on the Hubble Space Telescope roughly 20 years ago shows that NGC1808's galactic nucleus is unusually bright and blue. It also reveals that stars are usually born in compact star clusters (blue in this picture). The brightest set of stars seen here are probably inside a huge star cluster right at the center of the galaxy whose diameter is as large as 100 light years. Perhaps a recent passby of the adjacent galaxy NGC 1792 caused materials to move inward along NGC 1808's spirals under gravity, triggering a burst of star formation.
The QHY178M camera used by the author is a small-sized cooling CMOS camera with high sensitivity. This series also include QHY178C, QHY290M/C and QHY224C, all with high frame rate, ultra-low readout noise and high sensitivity. At present, other manufacturers of cooled 178 cameras have stopped production, making QHYCCD the only manufacturer that is still producing this model. The QHY178M/C is a camera for both planetary and deep-sky imaging that is very suitable for beginners. It is available in monochrome and color versions. The camera uses Sony's IMX178 back-illuminated CMOS with 6 megapixels at 2.4μm. It has readout noise as low as 0.9-2.4e-, 14-bit AD sample depth, and up to 50FPS frame rate at full resolution (on 8-bit). The camera's two-stage TEC cooler can reduce the temperature of the CMOS to 45 to 50°C below ambient temperature. At the same time, based on its many years of camera designing experience, QHYCCD provides good anti-dew measures for cameras, including electric heating plates and designs for connection to silicone drying tubes which can effectively avoid dew from forming.
The QHY178M/C is unique in its amplifier glow reduction circuit.
Glow refers to the fact that certain areas of the image are brighter than adjacent areas due to the effects of the internal circuitry of the camera or sensor. Historically, "amplifier glow" was often caused by amplifier circuits in CCD cameras. But in CMOS cameras, the so-called "amplifier glow" is not from the amplifier circuit. Each pixel in a CMOS camera has its own analog-to-digital converter (ADC) and noise reduction (CDS) unit. Today, CMOS cameras also has other supporting circuits such as clock generators and power supply regulators. These support circuits may emit near-infrared light, which produces a glow that affects shooting.
QHYCCD cameras uses QHYCCD's unique amp-glow reduction circuit to significantly reduce glow.

Through the comparison of dark frames captured by QHY178M and another 178M camera from another producer under identical environment, we can see that the glow control of QHYCCD has a significant effect. In addition, thermal noise is also lowered.
Please visit the official website of QHYCCD for further information about QHY183M and subscribe to our media for more information on astronomy and products.
https://www.qhyccd.com/index.php?m=content&c=index&a=show&catid=94&id=42 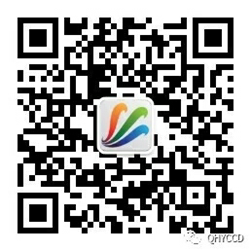